Beating Cancer as a Family: An IBX Associate’s Story 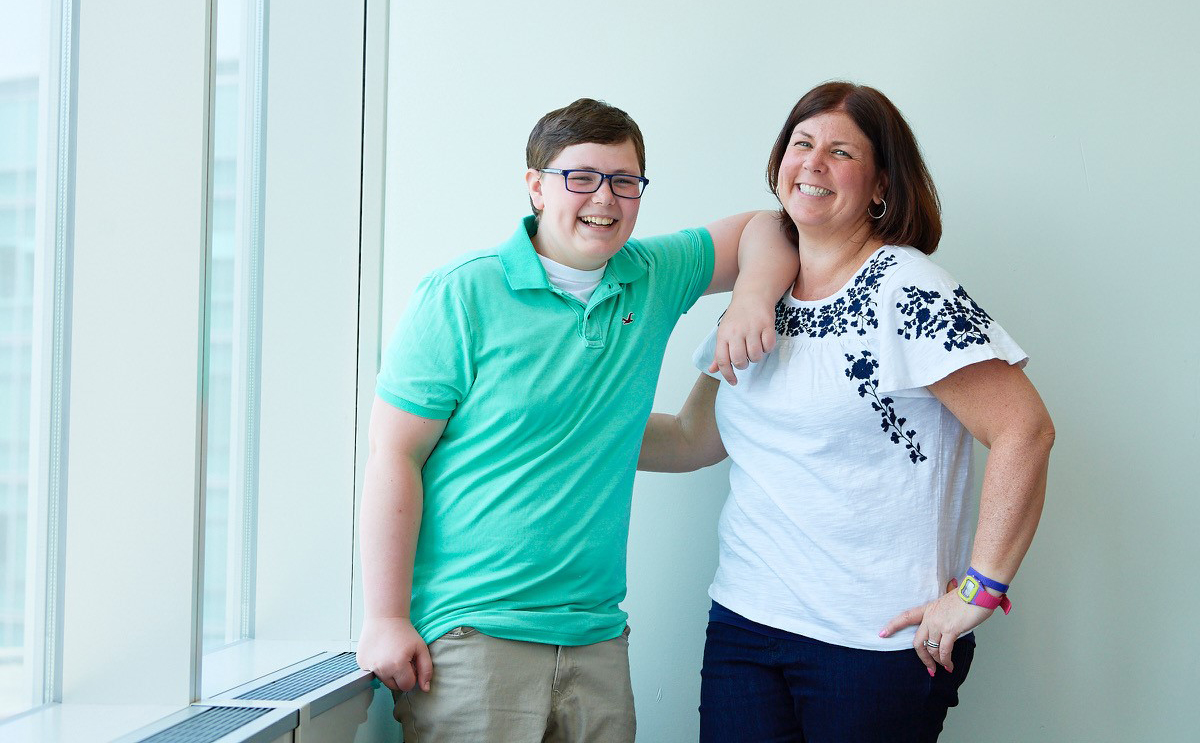 No parent ever expects to hear the words “your child has cancer” and to say that our world came to a crashing halt one day in March 2018 is an understatement. My son Nicholas, then 13, had lost more than 20 pounds over the course of 18 months. As a parent my mind went racing in every direction, and I was constantly on the internet looking for causes of his weight loss and lack of appetite.

His pediatrician assumed it had to do with puberty and his active swim schedule, so we monitored his weight for another six weeks. When he lost another six pounds, the pediatrician ordered lab work and when his counts came back extremely high, she got us into a gastrointestinal doctor at the Children’s Hospital of Philadelphia (CHOP) the next day.

After ruling out the possibility of a gastrointestinal issue through a colonoscopy and endoscopy, the doctor ordered a magnetic resonance enterography (MRE). It was on the MRE that they discovered a large mass in his mediastinum, and we were immediately sent to the ER at CHOP for more tests.

The tests confirmed the unthinkable – our son had Stage 3 Hodgkin’s Lymphoma. I could actually feel my heart break.

It is one thing being told your child has cancer, it is a total other thing having to tell your child he has cancer. But Nicholas took the news better than his dad and I. Unbeknownst to us, Nicholas had been cyber-sleuthing on his own and had come up with a variety of diagnoses, so he wasn’t surprised when then doctor confirmed his self-diagnosis.

When the ER doctor told Nicholas his diagnosis, he didn’t cry. He just had two questions: “Can you fix me?,” which the doctors told him his form of cancer has extremely high cure rates, and “Can we still go on vacation tomorrow to Disney World?” They promised to move mountains scheduling his biopsy so we could still go on vacation.

We did go on vacation, but it wasn’t the magical vacation we had planned. There were a lot of tears the first few days (mostly me and his dad), and we were mindful of the affect Nicholas’ cancer would have on our then-nine-year-old daughter. But by the end of our visit we were laughing more than crying.

My Son, a True Fighter

Nicholas went through five aggressive chemo cycles over the spring and summer of 2018 while still going to eighth grade and swimming on his club swim team. He faced his diagnosis with incredible courage and strength and went into each chemo treatment with an optimistic attitude and bright smile. I have no doubt that his positive attitude contributed to his treatments being a success.

Nicholas is now 15 years old and we just celebrated his one year in remission. He is now a sophomore in high school and this year he was an Ambassador for the CHOP Parkway Run & Walk on September 29, which raises money for childhood cancer treatment and research. You may have caught a glimpse of his smile on posters at PATCO and various social media sites. We had a team of more than 30 friends and family who participated and Nicholas was super excited to be an Ambassador and do his part to raise awareness and money for childhood cancer.

Our family is on a path that we never expected but we’re choosing to stay positive and face each high and low together.

Outside of work I like to spend time with my family, binge TV shows and travel. Disney World is our family's favorite destination! As a Senior Disease Management Coordinator with IBX I create health-related messaging for members with every day health concerns, chronic and complex health conditions. Working on these communications has made me more aware of taking care of myself and my family and I encourage everyone to do the same!
Tagged under: 2019, childhood cancer

The Eyes Have It — New Frames, New Me