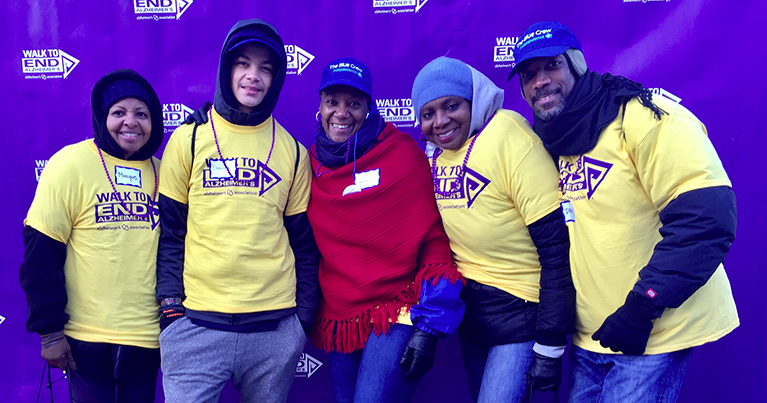 Dannielle Frierson (2nd from right) is pictured with her IBX colleagues at the Alzheimer’s Walk.

For Dannielle Frierson, a Blue Crew volunteer for more than 15 years, volunteering is all about the personal connection, “Life touches us in so many ways and gives us the opportunity to get involved and give to a cause that is close and personal.”

Dannielle had always been involved in the community and was volunteering outside of Independence Blue Cross (IBX) when one of her colleagues invited her to help out with a couple of Blue Crew events. The rest, as they say, was history. Over the years, Dannielle has been involved in many different events and organizations, and in 2007, she decided to join the Blue Crew Advisory Board so that she could be a voice for her volunteers and the people she works with internally at IBX and externally as well. As a member of the board, she votes on which activities the Blue Crew will sponsor and commits to leading two or more volunteer events a year.

Making a Difference in the Life of a Child

One of the organizations that has been the most meaningful to Dannielle throughout her time in Blue Crew is Philadelphia Reads — a program that she had been a part of since its inception. Philadelphia Reads partners first graders from Blue Crew’s adopted school, the Isaac A. Sheppard Elementary School, with an IBX employee who reads to them on a weekly basis. But, as Danielle discovered, Philadelphia Reads is about more than reading to children. It’s about showing children the importance of education, mentoring them, and building a close and supportive relationship with them.

This is perhaps most evident in a special relationship that Dannielle had with one student in particular. The little girl was behind academically and didn’t yet know her ABCs. Dannielle was paired with her and read to her week after week. She developed a close relationship with her and was saddened to learn that DHS had to remove the girl from her home due to an abusive situation. As a result, the girl left Philadelphia Reads and the Sheppard School for a time. Dannielle would often ask about the girl to make sure she was ok. Luckily, she was safe and was doing well. Years later, when Dannielle was back at the Sheppard School reading, she saw the girl, who was now a fifth grader. The girl was so excited because she remembered Dannielle and wanted her to read to her again. “I was blown away that she remembered me after all those years. It was so rewarding — I felt like an old teacher who saw a beloved former student,” said Dannielle.

Bring Along a Friend

For those who have want to get involved in volunteering but don’t know where to begin, Dannielle suggests asking others to join you. “Invite your co-workers, your family, or your friends when you volunteer at an event and it will catch on. It’s infectious. Volunteering is a priceless opportunity that touches lives, creates impact, and educates!”