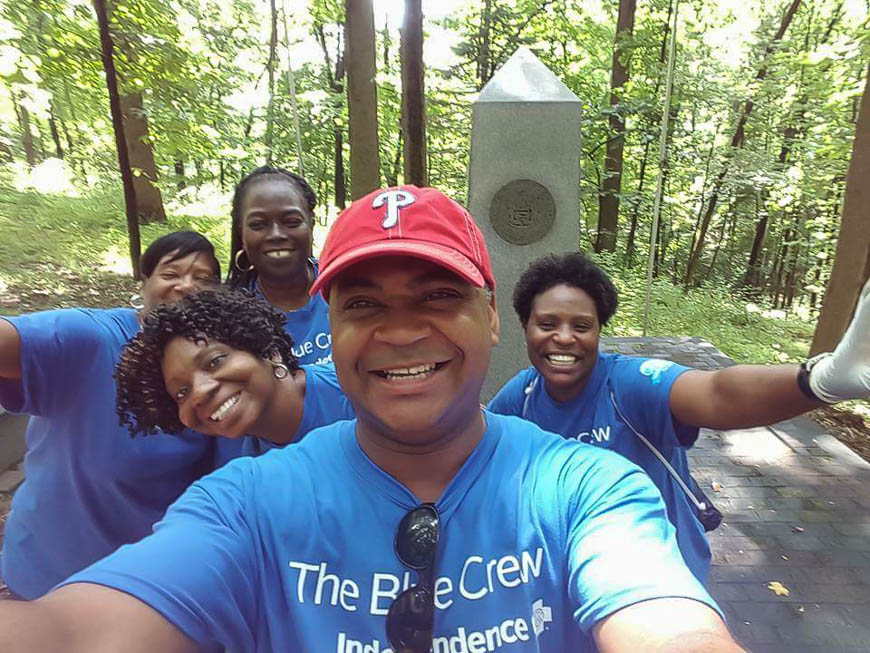 When you’re a volunteer, you have to be ready for anything — even things you can’t always see. One of Eric Inge’s most memorable (and eerie) volunteer experiences took place in the pre-dawn hours at the Philadelphia Zoo, when he and his fellow Blue Crew volunteers arrived to set up for a 5K race.

In the darkness, they could hear the breathing and low growls of the animals seemingly closing in on them but couldn’t see them.

Lighting the way with his smartphone, Eric was relieved to find the animals were safely in their cages and not on the prowl!

Giving back is a good feeling

When Eric says there’s nothing volunteers won’t do to make an event successful — even braving wild animals lurking in the shadows — he’s speaking from 10 years of experience working at annual events including the Philadelphia American Heart Association Heart Ball, the Philadelphia Mayor’s Masked Ball to support UNCF, and the signature fundraiser for Fred’s Footsteps.

The good feeling that comes from giving back makes up for times when the unexpected happens — like Eric’s unnerving zoo experience, or the time he was working the coat check at an event and the coatrack toppled over, depositing the guests’ coats in a pile on the floor. (He confirms that everyone did, in fact, go home with the correct coat.)

His favorite event raises money for the Drexel Neumann Academy, which helps prepare low-income students in Chester, Pennsylvania, to succeed academically and in life.

At his desk Eric proudly displays the colorful hand-drawn postcards from Drexel Neumann students thanking him for his support.

Eric loves that being on the advisory board gives him a voice in helping decide what organizations and events the Blue Crew supports.

Inspired by a coworker who was diagnosed with breast cancer, he’s working to organize volunteer support for an upcoming fundraising event to benefit breast cancer research.

He’s also passionate about volunteer projects in the neighborhood he grew up in, where he says it wasn’t unusual for families to make enough food to feed the whole block when someone was in need.

He believes we have a responsibility to help those who aren’t as fortunate, and one of the best ways to stay grounded is to become a volunteer.