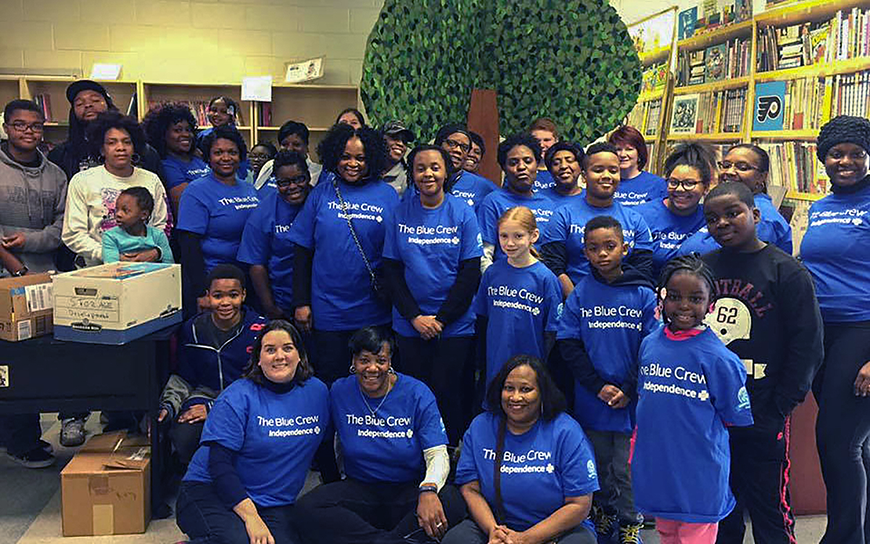 Helen Furlow (sitting, second from left) and a team of Blue Crew volunteers participate in the Philly Reads Book Repository Clean-up during the 2017 Martin Luther King Day of Service.

Sometimes it’s the simplest things that take our lives in new directions — things like a handful of unsharpened pencils.

One day ten years ago, Helen Furlow was at her desk when a coworker, Donna, asked to borrow a pencil sharpener. When Helen asked why she needed so many pencils sharpened, Donna explained that she and her fellow Blue Crew volunteers were using them with first graders participating in the Philadelphia Reads literacy program.

Helen said she’d love to become a volunteer reader. Ever since, she’s given her time — literally hundreds of hours — leading Philadelphia Reads and countless other Blue Crew projects over the years. She’s been honored as one of the top Blue Crew volunteers of the year.

I Love to Volunteer, Plain and Simple

Volunteering was a bright light during a dark time in Helen’s life, as she was grieving the death of her beloved father. “I needed something to focus on other than his loss,” she says. “Volunteering helped me come back around.” Initially, it was her way of dealing with her grief, but as time went on, Helen realized giving back to the community was also the best way to honor her father.

As a member of the Blue Crew advisory board, she’s helped the Blue Crew connect with several regional non-profits that need volunteers.

Two of these are MenzFit, which helps men find jobs by providing professional interview clothing and career development services, and For Pete’s Sake, which gives adult cancer patients and their caregivers the chance to take a break from cancer through respite vacations.

“Why do I volunteer? I love it, plain and simple.”

Helen has a long list of annual events she loves to support but counts the Philadelphia Police Athletic League (PAL) Prom Boutique among her favorites, where volunteers serve as personal assistants to young ladies “shopping” for their prom attire at no cost to them.

“It warms your heart to see the girls pick out their prom dresses and accessories and to know you are helping them get ready for their special night.”

As a mother and grandmother, Helen encourages her family to join the fun whenever possible and says they love it as much as she does. She and her young grandson recently volunteered together at the annual Philadelphia Walk to End Alzheimer’s to benefit the Delaware Valley Alzheimer’s Association.

“I believe in getting kids involved in volunteering as early as possible!”