2020 Celebrate Caring Winner Jeff Salvatore: On the Frontlines of COVID-19 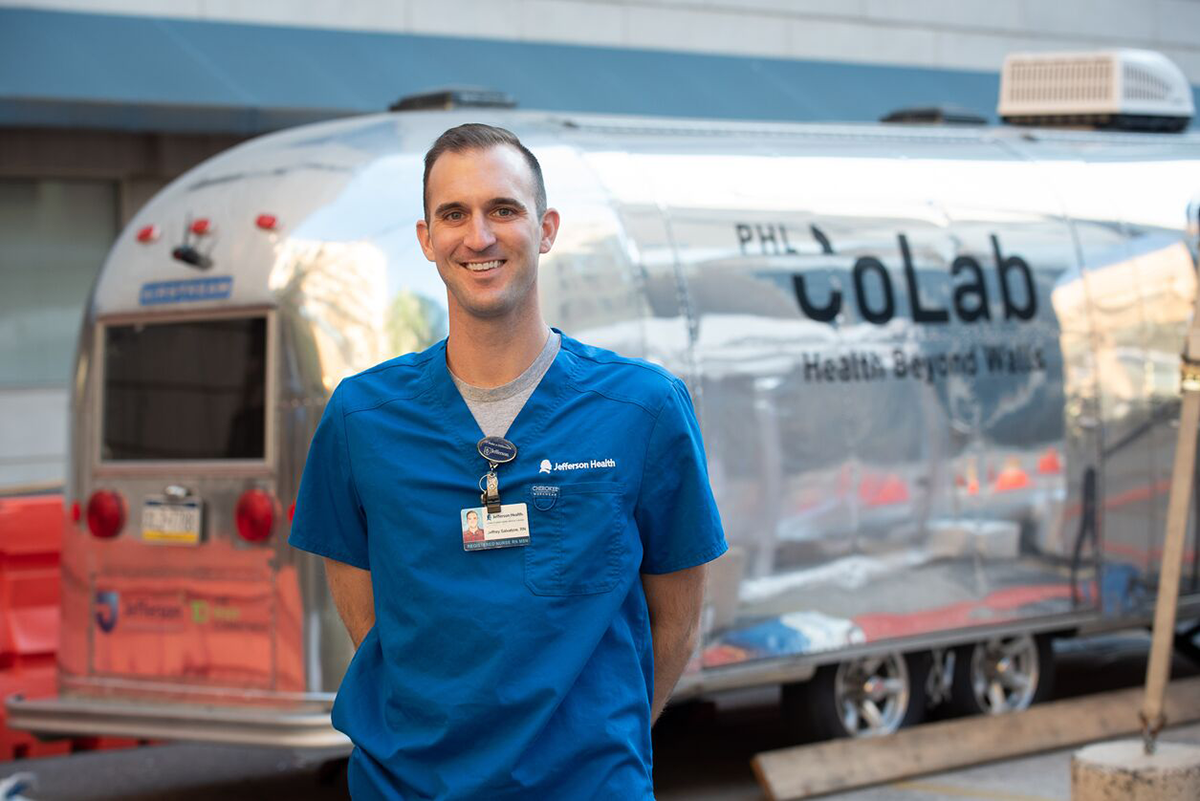 The morning before Independence Blue Cross announced its Celebrate Caring winners, the COVID-19 mobile testing site at Thomas Jefferson University Hospital (TJUH) was quiet. Soon the “Swab Squad,” a group of nurses responsible for running the testing site, appeared. The parking lot was transformed by tents, trailers, and traffic cones. They formed a circle on the concrete and began their morning warm-up.

First jumping jacks, then jump squats, and finally shadow boxing. It was a cool May morning and this was a great way to get their blood flowing and prepare for a long day of testing people who might have COVID-19. 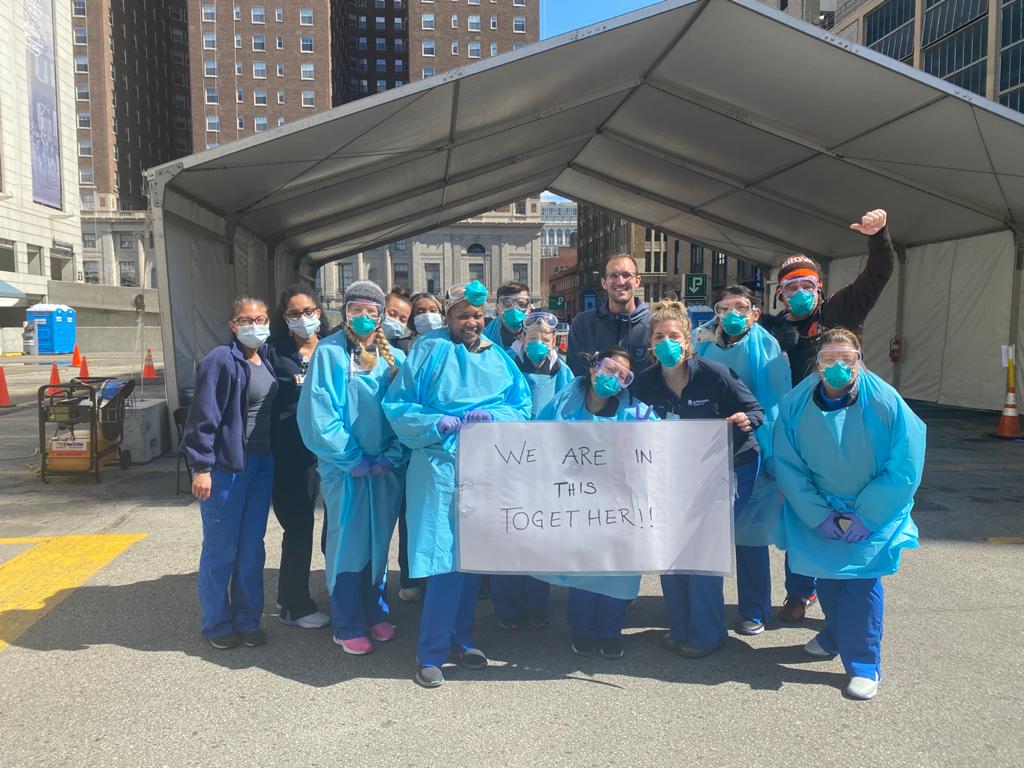 A larger group in scrubs and white coats descended onto the lot. The staff was there to surprise Jeff Salvatore, Clinical Nurse Specialist, with the news that he was selected as a winner of the Celebrate Caring campaign that recognizes outstanding nurses in the region.

Jeff’s team went around the circle, acknowledging his incredible leadership during this unprecedented crisis, while others filmed on their smartphones. Someone read quotes from the many nominations Independence received for Jeff. It was a small but special moment punctuated by celebratory bagels and coffee.

After the warm-up routine, everyone puts a foot in the middle of the circle (since they can’t touch hands) and someone shouts, “Swab Squad on three!” On three, the group does the chant and disperses.

Before the morning rush, the Swab Squad does a quick check-in. They cover any issues and updates. Most importantly, it’s an opportunity for Jeff to check in on the staff.

“Nurse burnout was an issue before the pandemic hit,” said Jeff. “Nursing is a difficult job to begin with. Now we’re doing it on this pandemic scale. Everyday, you’re waking up to this intense, anxious environment, and you have to get ready to go take care of others.”

The Power of Positivity

That’s why Jeff encourages his team to take care of themselves, first.

“A good headspace is important. It helps you slow down and avoid mistakes. When you’re focused, you deliver better care. When you’re scared, anxious, or tired, it’s more difficult to do your job.”

Of course, in the current climate, it’s hard not to be scared. For Jeff, maintaining a positive culture on the team is a priority.

“People perceive adversity as either an opportunity or a disadvantage. We chose to make it an opportunity. It’s just as much work to be positive as it is to be negative,” he said.he said. “It’s not easy, and you have to work at it. But that’s what’s going to get us through this.”

Jeff learned the importance of taking care of his emotional health when he worked in the cardiac intensive care unit, where life and death situations happen every day. It took a toll on him, and he realized how important it is to process your feelings and be mindful of your perspective.

“As a nurse, I had to realize that I’m not going to fix or heal everyone,” he said. “Sometimes, taking care of someone means making them comfortable, or letting them express their anger or fears. You might not be able to heal everyone, but if you can provide a moment of comfort or relief for a patient and their family, that’s a victory.”

A Culture of Care and Support

As leader of the Swab Squad, Jeff believes that taking care of the team’s emotional health means creating a culture where they feel supported and motivated.

“This was my first time being in a position where I’m taking care of the people taking care of patients,” he said. “My goals are to make the nurses feel safe, supported, and energized so that they want to do their job.”

The nurses staffing the mobile testing site are the hospital’s pool nurses, who float between units as needed. Many of Jeff’s nominators wrote that he was able to create a sense of family for nurses who didn’t have a home base at the hospital.

The Swab Squad has made national news with a recent appearance on The Ellen DeGeneres Show after their TikTok dance to Ciara’s “Level Up” went viral. For Jeff, the attention has been an honor, although overwhelming.

“The whole experience has been completely surreal. Even just working in a parking lot. I haven’t had time to process it all, since I keep going back to the patients. But I hope people are being inspired to take care of themselves or experience some joy. Maintaining that joy and working together is how we’re going to get through this.”