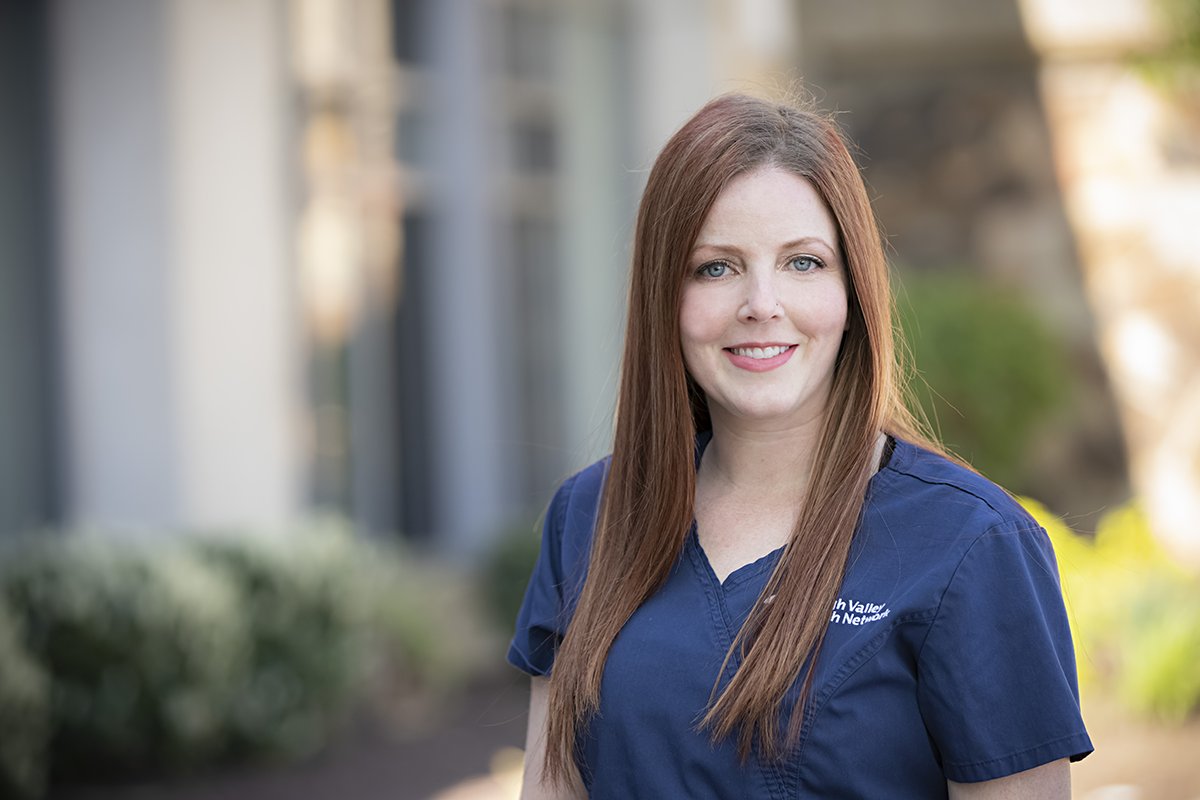 Nursing is a second career for Stacey Lang, who works on the Medical Surgical Oncology floor at Lehigh Valley Hospital – Muhlenberg. While she comes from a family of health care providers (her dad is a doctor and her mom is a nurse practitioner), initially Stacey resisted following suit.

Instead, she studied elementary education in college and spent a year and a half teaching English in Chile. She became fluent in Spanish during her time in South America and taught it when she moved back to the States.

The Best of Both Worlds

While Stacey loved teaching, she was inspired to go back to school for nursing by the same person who nominated her for Celebrate Caring: her sister, Jamie, who’s also a nurse.

Jamie’s stories about clinicals were enough to convince Stacey to enroll in pre-requisite courses. From there, Stacey knew she was on the right path. Best of all, she was still able to use her teaching skills, and her Spanish comes in handy with patients.

Whether it’s teaching seventh grade study skills or how to manage chronic conditions, “Nurses and teachers have so much in common,” Stacey said. “They’re caring and they’re constantly educating.”

Stacey is also a preceptor for new nurses in the unit. “It’s not for everyone,” she said. “Some people feel like it slows them down. But I love teaching, and I love seeing how far they’ve come by the end of orientation.”

It’s been two years since Stacey cared for the patient in her nomination story, but she remembers him vividly.

“Over time, nurses see thousands of patients. But certain people stick with you no matter how many years go by,” she said.

The patient was a man in his late forties with end-stage cancer. His wife also had a serious health condition. Their 17-year-old daughter was about to graduate high school.

One of the oncology doctors on the floor, Dr. Ranju Gupta, gave the patient a set of blank cards. She encouraged him to write to his loved ones. At this point, the pain in his hands was too severe to write, so Stacey helped.

“On that first day, we wrote his daughter’s 18th birthday card. He would dictate, and I would write. I was crying and kept apologizing, but he was so brave,” Stacey said. “When we finished, he signed his name at the bottom.”

Driving home from work, Stacey couldn’t shake the experience. She kept thinking about a father leaving his daughter, right at the start of her adult life. She wanted to do more.

“I pulled into a Walgreens and bought a bunch of life event cards: 21st birthday, college graduation, engagement, wedding, first child. I thought if I was her, I’d want someone to do that for me,” said Stacey.

Over the next couple of days, Stacey and other nurses on the floor helped the man leave behind special messages for his daughter in those cards. The cards are with a family friend for safe-keeping until each of those days come.

Often, major life events are the moments we miss loved ones the most. “Hopefully on these days, her father’s words bring her some comfort and peace,” Stacey said.

Stacey loves where she is professionally, despite the emotional toll oncology can take. “I guess just being there for people during the scariest moments of their lives makes it all worth it,” she said.

“Many oncology patients were relatively healthy prior to their diagnosis, and it’s their first time in a hospital. I’m there to support them and their family as an extension of them,” Stacey said. “Sometimes that means sitting there when they cry or making them laugh.”

Overall, being in oncology has taught Stacey not to sweat the small stuff.

“When I switched to oncology, little things that used to bother me daily stopped. I’ve learned to appreciate life in a new way and value each moment. It takes a lot to get under my skin now because I’m always reminded that life is short,” she said.