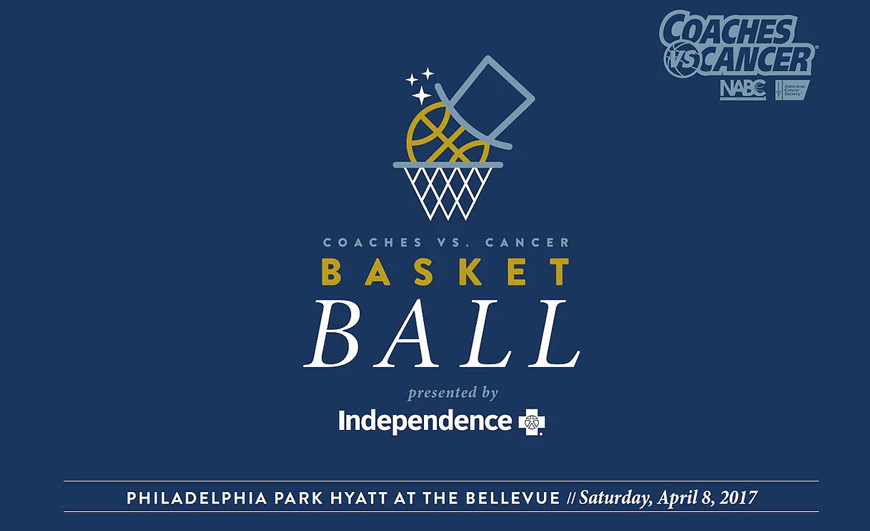 Anyone who knows me knows I am passionate about basketball. Friends and colleagues also know that I am passionate about another, more serious subject – the fight against cancer. So you can see why I urge everyone to support the American Cancer Society’s (ACS) Coaches vs. Cancer BasketBall Gala presented by Independence Blue Cross. This year it is Saturday, April 8, fittingly right after March Madness ends.

This is the 14th annual dinner since the ACS began working with the Division I college basketball coaches from the Philadelphia region, including the current group of Phil Martelli (St. Joseph’s), Fran Dunphy (Temple), Steve Donahue (Penn), John Giannini (LaSalle), Zach Spiker (Drexel), and Jay Wright (Villanova). It has been the most successful Coaches vs. Cancer program in the country, having raised about $14 million in as many years. Since 1993, college basketball coaches have raised more than $100 million nationwide for the ACS.

The 2017 event honors Dick Smith, a St. Joseph’s alumnus who is past president of the school’s Alumni Association, its Law Alumni Association and the Hawk Hoop Club. Coach Martelli told me that the coaches chose Dick because he exemplifies the spirit of the Coaches vs. Cancer program in his personal battle against cancer. Coach Martelli said that Dick’s determination and his commitment to helping others is an inspiration to all of the coaches. I completely agree. They couldn’t have made a better choice.

Everyone is impacted in some way by cancer – whether it has affected you directly or touched the lives of your family or friends. And it’s devastating. Let’s all pull together and join the coaches against cancer. They and the American Cancer Society need passionate supporters who are equally determined to wipe out this terrible disease.

Daniel J. Hilferty is president and chief executive officer of Independence Blue Cross, one of the nation’s leading health insurers. Since Mr. Hilferty became CEO in 2010, the number of people the company serves is more than 8.5 million in 25 states and the District of Columbia. Mr. Hilferty’s vision is to lead the transformation of health care in America, seeking innovative technologies and new models of care that will increase the quality and lower the cost of care. He is a sought after speaker on leadership, transforming health care, and the role of technology and big data, appearing in The New York Times, The Wall Street Journal, MSNBC, and other national media. Mr. Hilferty serves on the board of directors for the Blue Cross and Blue Shield Association (BCBSA), is chairman of the BCBSA’s Health Policy and Advocacy Committee, and serves on the executive committee of the board of directors of America’s Health Insurance Plans (AHIP). Mr. Hilferty earned his undergraduate degree from St. Joseph’s University in Philadelphia, PA, and a Master of Public Administration degree from American University.