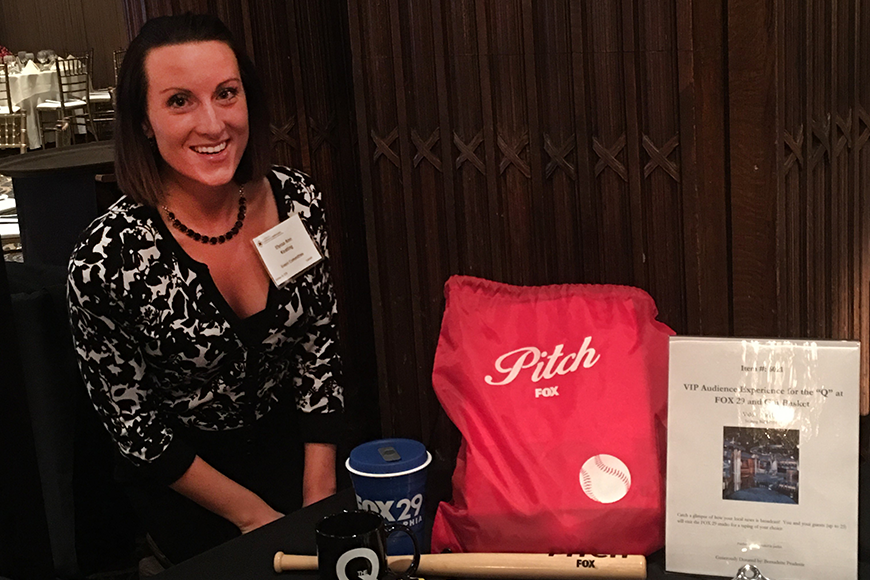 Elyssa Ann Keating helping to set up the silent Auction during the Gaudeniza's annual award dinner.

Elyssa Keating will never forget her first week at Independence Blue Cross (Independence). It was her second day of work when she received the call that would change her life — her high school boyfriend died of a drug overdose. The news shocked and devastated her.

To cope with the tragedy, Elyssa threw herself into volunteering. Soon afterwards, she visited an agency fair sponsored by the Blue Crew and came upon information about Gaudenzia, an organization that provides addiction treatment and recovery services. After learning about the organization, she immediately knew she wanted to volunteer there. What she didn’t know was that volunteering at Gaudenzia would give her the peace she needed to move on from her tragedy.

A Glimmer of Light During a Dark Time

Elyssa will never forget her first visit to a Gaudenzia facility located in West Chester in 2016.

“It was tough to see so many people struggling with addiction, especially the mothers with children,” said Elyssa. “You think the kids don’t know what’s going on, but they do. They know their moms are sick and trying to get better.”

Despite the difficulty of witnessing the program participants’ daily struggles with addiction, Elyssa dedicated more and more of her time to the organization. Eventually, she found light within the darkness she had been feeling.

“As I spent more time working with Gaudenzia, I was able to meet people who were either currently in the program or had already completed the program and see them in a better place. It was therapeutic,” Elyssa said. “It gave me peace and hope to see people getting help and knowing that you can change your life around.”

It’s been three years since Elyssa first got involved with Gaudenzia through the Blue Crew, who volunteer at the organization’s annual awards dinner, and she has no plans to stop.

Gaudenzia recently celebrated its 50th anniversary, and Elyssa couldn’t be prouder of what the organization has done to fight addiction in our community.

“I hold Gaudenzia close to my heart and enjoy giving them as much of my time as possible,” said Elyssa. “They are addressing serious issues and helping people get to the root of their addiction so they can get better. What I especially love about Gaudenzia is that they provide services to address substance abuse and mental health, which is so important because many people are struggling with both.”

Leaving her tragedy in the past, Elyssa looks forward to a future where all people can get the help they need to overcome addiction — once and for all.

Independence is committed to turning the tide on opioid addiction and overdose by focusing on the prevention and treatment of this crisis. Learn more about what Independence is doing to fight the opioid epidemic and be sure to check out this list of opioid and substance abuse resources to help those struggling with addiction.

benefits of volunteerismpeace and hope through volunteering