From Boots to Suits: Transitioning From the Military to IBX 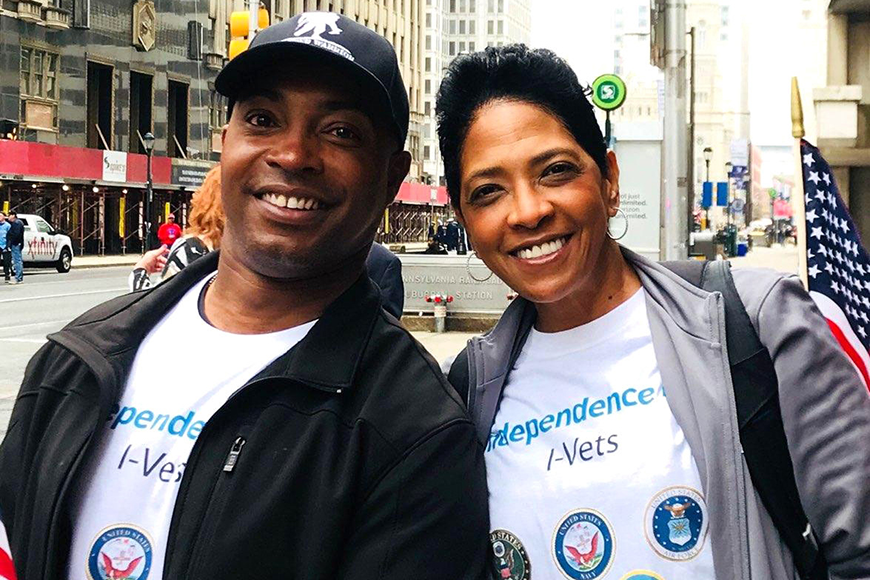 When Sean Sanders graduated from military school in south central Pennsylvania, he had two choices: enlist or return to his North Philadelphia neighborhood. He chose the military and proudly served in the U.S. Army for 22 years, reaching the rank of first sergeant.

During his time in the Army, Sean traveled the world, including Europe and Asia, and spent many of his years as a civil affairs specialist. In this role, he supported relief and redevelopment efforts in foreign countries. Sean was proud of everything he had accomplished in the military. He had seen many difficult things, but he knew that he helped make a difference in the lives of others.

Life After the Military

Unfortunately, Sean’s military career was cut short when his leg was badly injured by an improvised explosive device. With his military career behind him, he started the process of readjusting to civilian life by moving back to Philadelphia and joining Independence Blue Cross.

“When you’re in the military, it defines you,” said Sean. “When their military careers abruptly end, many vets can’t deal with it. They can’t always see how they can transition their skills, but they have a lot to offer.”

Fortunately for Sean, his transition from the military was a good one — he found a couple of important similarities between the two.

“When I first got to Independence, I noticed that the company had clear goals, values, and structure. I liked that because that’s what I was used to,” he said. “I was also able to apply many of the skills I learned in the military, like team leadership and problem solving, to my roles here, first as an analyst and in my current role as a manager.”

A Culture of Giving Back

Sean also valued the company’s culture of giving back.

“Independence has a real footprint in the region,” said Sean. “I especially appreciated their emphasis on providing opportunities to veterans and supporting the veteran community. When Independence built the Wellness and Learning Center at The Veterans Group, that was awesome.”

Most importantly, Sean found a new military family in the IVets, the company’s veterans’ associate resource group. The IVets support the veteran community in a variety of ways, including hosting recruiting and networking events for veterans, preparing care packages for the Christmas in July program, volunteering at local veterans organizations and events, and bringing awareness to veterans issues, such as suicide awareness.

“The IVets is a group of brothers and sisters. Having that community of support and camaraderie is invaluable,” he said. “It’s important that other veterans know that there are people here to support them.”

Continuing His Service By Helping Other Veterans

While Sean had a relatively easy transition, he knows that this is not the case for all veterans. Many vets find it difficult to readjust to civilian life after spending time in the military, so he is committed to helping them make a successful transition.

Outside of the IVets, Sean volunteers with the Blue Crew to support veteran organizations and activities, including The Veterans Group, the Veterans Multi-Service Center, and the Medal of Honor Grove.

He is also an active volunteer with the Wounded Warrior Project. As a peer support group leader with the organization, Sean helps veterans readjust to civilian life by providing a safe place for vets to discuss their issues, helping them find a job, and assisting them with getting benefits and services through the U.S. Department of Veterans Affairs.

“I want them to know that there are people here to support them and that they can build a successful and good life outside of the military,” he said. “I always remind them that the military is not who you are, it’s a part of who you are — that mantra helps with the transition.”

Independence salutes Sean and all our military personnel for their service to our country and for the many talents they bring to the workforce!