More Than Just Volunteers: The Blue Crew are Champions of Change 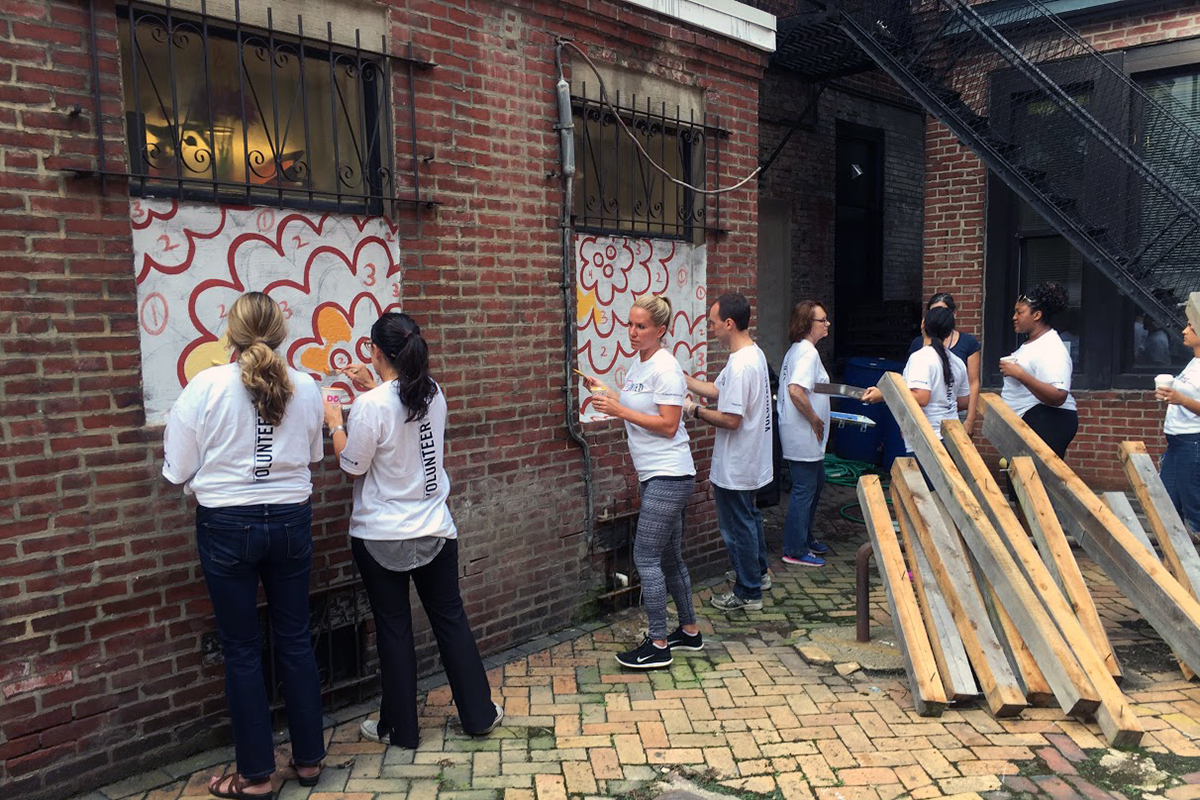 Blue Crew volunteers painting a mural at a Turning Points for Children center.

When I received a phone call from the United Way of Greater Philadelphia and Southern New Jersey during the summer of 2016, I didn’t expect it would lead to me ordering a truck containing two cubic yards of topsoil.

In addition to trucks and topsoil, that call led to one of our most invaluable connections with a volunteer group: the Blue Crew, the Independence Blue Cross corporate volunteer program.

The Beginning of a Great Partnership

In September 2016, a group of 40 fabulous Blue Crew volunteers transformed a neglected courtyard into a beautiful and inviting space for our agency, Turning Points for Children. We’re one of the largest social service providers in Philadelphia. We help 17,000 men, women, and children each year, and manage the largest foster care program in the city.

I will never forget that first encounter with the Blue Crew. A massive truck arrived with the soil and was going to dump it on the street next to our offices on Waverly Street.

Fortunately, one of the Blue Crew volunteers realized that such a huge amount of soil right on the street could be an issue for Turning Points. “Hold up,” he told the driver. “We’ll get a tarp down on the street and then you can dump the soil on that.”

Going Above and Beyond

As the Development Officer for Turning Points, I knew little about topsoil or trucks, but I did know that I was grateful at that moment for the Blue Crew.

An hour later, we had filled all the planting beds and still had a lot left over. But that wasn’t a problem. The Blue Crew took the load and filled every sidewalk tree cut within two blocks until there was nothing left on Waverly Street. This is just what they do — go above and beyond to truly make a meaningful impact on the community.

In just one day, the Blue Crew built and planted flower beds, pulled weeds, and painted murals, doors, and an ugly cement wall. When it was done, we had a gorgeous space that is still used for team meetings and client gatherings. We are so appreciative!

Since then, the Blue Crew has continued to come to one of our locations for a day of service each year. In addition to their passion for giving back, they bring a lot of joy to our hard-working staff and the clients that we service. In past years, the Blue Crew has built benches to honor foster families, fixed a closet floor, stocked shelves at our food pantry, made an outside handicap ramp for our clients, and so much more. No matter what crazy idea we come up with, they are always there to help.

Last November, we honored a Blue Crew member with a Volunteer of the Year Award. This individual was selected for the award because they truly embodied the ideal of going above and beyond: coming to every volunteer activity throughout 2018 and chairing the silent auction committee for the Turning Points Annual Gala. While they got involved with us through the Blue Crew, they continued to be engaged independently and by the end of the year, they raised $14,000 for our agency and had donated over a hundred hours of service.

The Blue Crew is instrumental in helping Turning Points provide better services for vulnerable children and families in our city. We are so thankful for them and look forward to partnering with them in the future. The Blue Crew are truly champions of change in the community.

Monika Kreidie has worked in non-profit for 30 years as a Development Officer and Program Manager. She is going on five years at Turning Points for Children, the largest social service agency for Children in Philadelphia and previously was at Independence Charter School, WRTI-FM radio and Meet the Composer in New York. In 2006, Monika founded the NLArts Community Arts Program which continues to thrive in Northern Liberties. She was award Parent of the Year from Philadelphia Family Magazine in May 2019 and is an active member of the Northern Liberties community as well as an avid gardener.