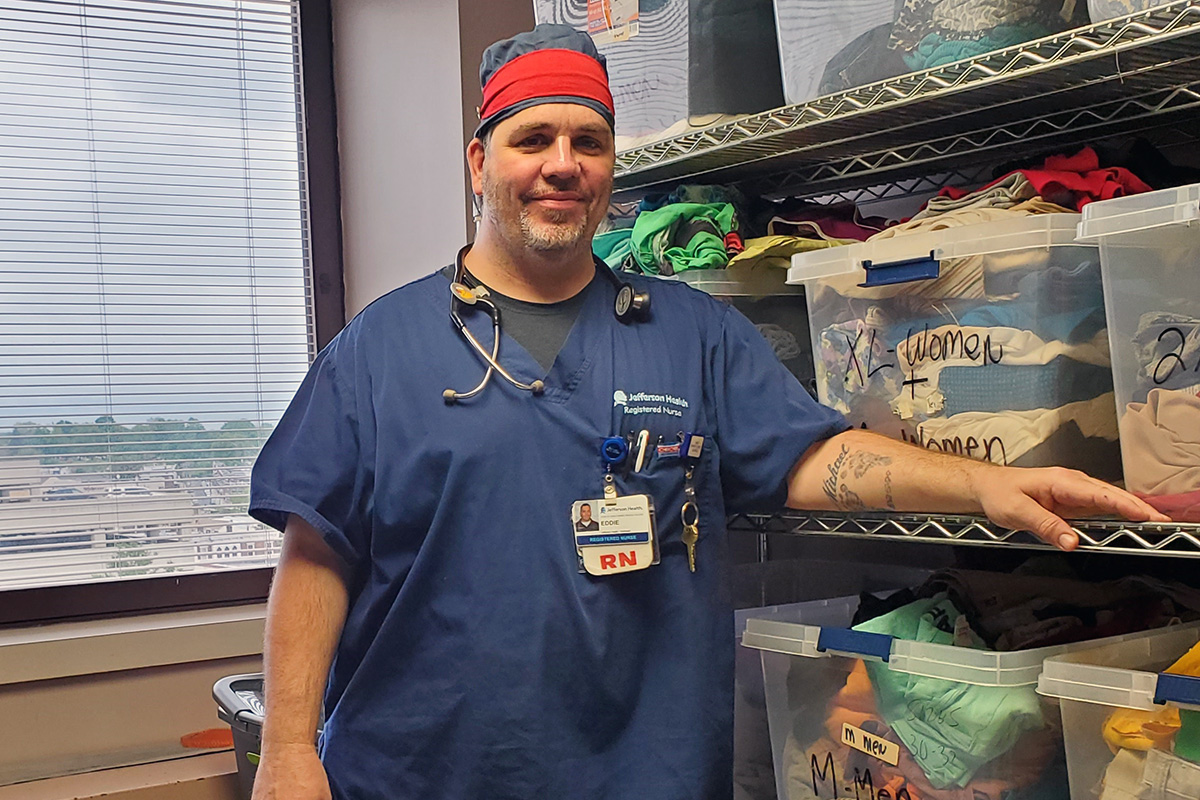 Eddie Welsh will never forget the day three years ago when one of his patients was being discharged and had no clothes to wear home.

“It was raining outside, and he was literally being sent home in paper scrubs,” said Eddie, a registered nurse at Jefferson Frankford Hospital. “While you’re here at the hospital, we feed you, we shelter you, we give you medication and take care of you, but then we let you leave without any clothes. I was so embarrassed.”

Then and there he decided to do something. He searched the hospital for an unused room and began to fill it with clothes he collected and even bought himself. The hospital’s maintenance people brought some bins and the stash quickly grew. “I didn’t ask permission,” Eddie joked. “I figured my boss would either love it or fire me.”

Thankfully, his boss loved the idea. The collections, which he dubbed Project Cotton, quickly grew and people from all over the hospital began donating clothes. Project Cotton is now in Jefferson hospitals throughout the region, but Eddie doesn’t want to stop there. His hope is that every hospital and trauma center in the United States adopts the idea.

“Patient reactions to Project Cotton have been overwhelming,” said Eddie. “When I give someone clothes, their whole face changes. Something is lifted. Some people even cry when I tell them the clothes are theirs to keep. I get letters from people thanking me, telling me what an unbelievable difference I made.”

Going Above and Beyond

Eddie estimates that in three years Project Cotton has provided more than 10,000 pieces of clothing for patients.

“Ed gives his all to his patients,” said his nominator April Draine Nicholson. “He embodies the exemplary character nurses should strive to be through his total commitment to the field of nursing.”

Eddie recently founded a nonprofit organization to help take his vision national and eventually global. “There is nothing more rewarding than watching someone who is injured or sick get better and leave the hospital with pride and dignity,” said Eddie.

I’ve been working in public relations in the health insurance industry for almost 30 years, starting my career with CIGNA and coming to Independence in 2006. I work with journalists to tell our best story and enhance and protect our brand. There’s always something new to promote, which makes the job fun and challenging at times, but never dull. When I’m not hanging out on the 38th floor at Independence, I’m running (I’ve done 11 Blue Cross Broad Street Runs), cooking, playing the piano, screenwriting and travelling when I can.