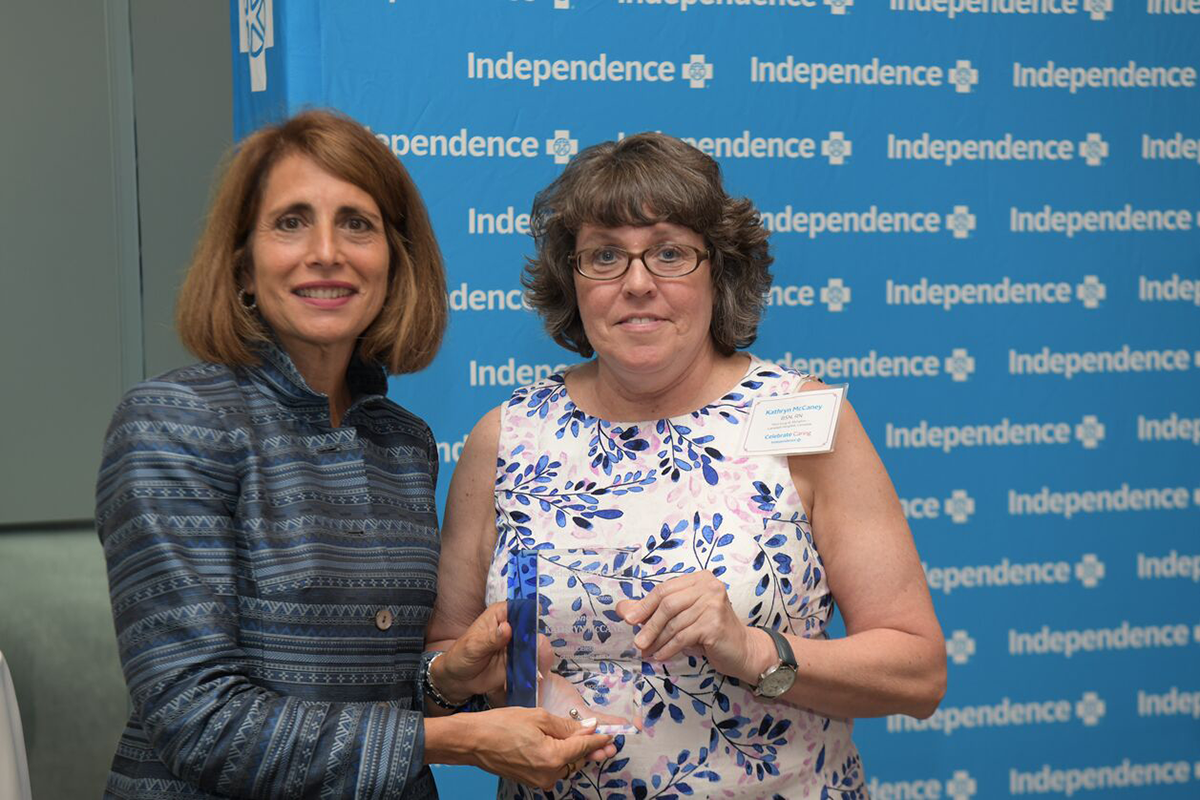 Caring is in all of us, and nurses truly embody that spirit. Independence Blue Cross received nearly 700 submissions for its Celebrate Caring campaign. We are honored to share the stories of our top ten 10 finalists, including Kathryn McCaney, a nurse manager at Abington Lansdale Hospital – Jefferson Health.

A detour in engineering on the way to nursing

Growing up, Kathryn McCaney looked to her mother and father for career inspiration. Her mother was a nurse, and her father was an engineer. Kathy initially decided to pursue nursing.

After her first semester at St. Luke’s University Hospital in Bethlehem, Kathy recalls marching down the hallway of her dorm to call her parents from a payphone. Nursing just wasn’t for her, she told them. By spring, she was at Penn State University pursuing an education in electrical engineering. After three years of study, she picked up the phone again.

This time she called to say: “I’m going to back to nursing.”

That was over 35 years ago, and Kathy’s been a nurse ever since. Her time in engineering left its mark, though. She still carries a pocket protector, and whenever there is an issue with equipment at the hospital, she’s the first person to try to fix it.

Evolving with the hospital over three decades

Kathy has spent most of her career at what is now known as Abington Lansdale Hospital – Jefferson Health. She started in Pediatrics working the night shift back when it was North Penn Hospital. She spent 12 years there caring for children. When she decided to start her own family, working the day shift became more practical. She moved to the Medical-Surgical/Progressive Care Unit, providing a broad range of care for adults who are acutely ill or recovering from surgery.

Kathy has witnessed the hospital evolve over the past three decades, and has helped lead the change in recent years. When Abington Health and Jefferson combined in 2015, she took her first management role in the Intensive Care Unit to ensure a smooth transition.

Now, she’s back in the Progressive Care Unit, the floor Kathy calls home, but this time as manager.

“Being a manager still allows me to be hands-on with patients. It’s important to me that I don’t lose that bedside interaction,” she says. “I check in with everyone—patients, families, staff.” Sometimes, that makes a world of difference.

Earlier this year, a woman from out-of-state was unexpectedly admitted to Abington Lansdale Hospital. The timing was terrible. She was traveling with her daughter to bury her husband next to their late son.

Soon after they arrived at the hospital, the secretary in the unit noticed that the patient and her daughter were upset. Concerned, the secretary decided to mention this to Kathy to see if there was something they could do to help.

Kathy went over to talk to the family and listened as they explained the situation. The patient’s daughter was desperate to get her mother discharged in time for her father’s funeral. People were coming in from all over, she explained. Her parents had been married for 62 years.

Kathy did everything in her power—she even arranged to travel with the patient to the funeral and burial to provide medical support. But when the day came, the doctor determined that it wasn’t safe for the patient be released.

With that determination, Kathy’s focused shifted. If the patient couldn’t attend her husband’s funeral, could she bring the funeral to her? She figured it wouldn’t hurt to ask. Kathy dialed the funeral home and asked if the procession could make a pitstop at Abington Lansdale Hospital on its way to the grave.

They agreed. “They could have said no,” Kathy says, “but I had to make the effort.”

Kathy got permission from the doctor to wheel the patient outside, and the patient’s daughter brought in the outfit for her mother to wear.

“We dressed her, over the IV and everything,” Kathy recalls. “Then we took her downstairs and waited in the lobby for the procession to arrive.”

When the procession arrived, the patient’s daughter greeted her mother with a rose and her father’s wedding ring. They opened the door, so that the patient could view the casket. A wave of emotion rushed over Kathy when she saw an American flag carefully folded over it.

“I didn’t know he was a veteran,” Kathy says. “That was a powerful moment for me. I was so glad that she got to see him being honored that way.”

After the patient took a moment to say goodbye to her husband, the rest of the procession passed by, waving at her along the way.

When they returned to the hospital room, the patient insisted on staying dressed. She was going to virtually attend the burial via FaceTime.

In the few months since the funeral, Kathy has been in touch with the family a handful of times and is happy to report that the patient is doing well. As for her heroic gesture, Kathy remains humble.

“I just knew that if I was in that situation and somebody did that for me, I would be so grateful. We got her the closure she needed instead of carrying on without her. It just made sense to do what we could.”