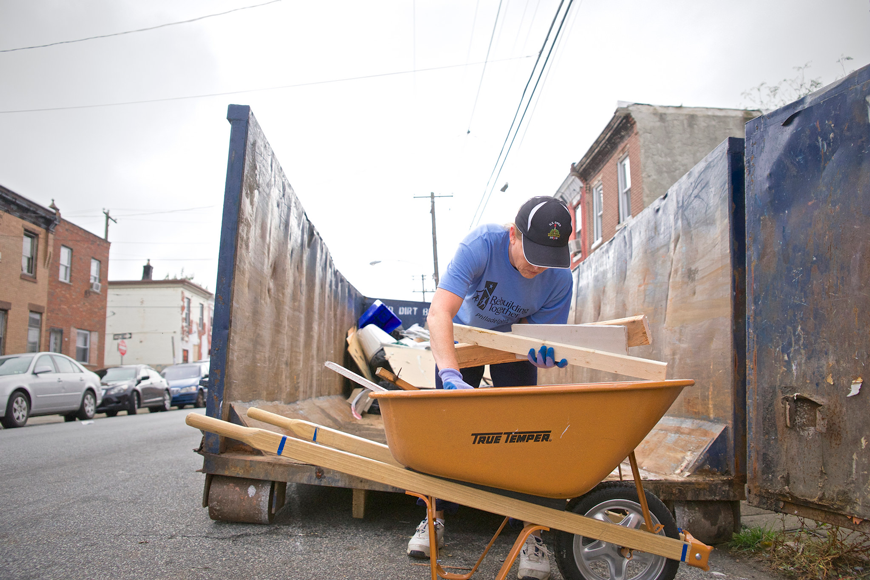 Not everyone finds their happy place between pushing a pen and swinging a hammer, but Jeanie Heffernan has. For nearly 15 years, the Chief Human Resources Officer has been volunteering with Rebuilding Together Philadelphia, which provides low-income or disabled homeowners with health-focused home improvements. Now she’s harnessing the power of the Blue Crew to get the job done.

“Whatever is required, we do.”

“At Rebuilding Together, our mindset is ‘underpromise and overdeliver,’” Heffernan says. “We’ll go in and assess the home, do a work write-up of all the work that we are willing to commit to, and then typically we do more.”

By “we” she means the volunteers — people of all skill levels, no previous experience needed. “We do everything from demolition to painting to ripping up rugs to remediating holes in the floors of people’s homes to ripping down ceilings, putting up new ceilings, drywall, spackling, painting.” She tells us. “Whatever is required, we do.”

In a lot of cases, it’s water damage. A leak can cause a cascade of problems, from warped floors to mold. A recent home the Blue Crew worked on hadn’t had a working oven for 20 years. The homeowner struggled to cook healthy food for her family. Lead paint can also be an issue. It’s just one of the items on the 26-point checklist of health hazards Rebuilding Together volunteers address in 75 homes a year.

Rebuilding More Than a Home

Occasionally Heffernan gets to use her HR skills on the worksite. A few years ago, she prepared to work on the home of a Vietnam veteran with PTSD. “He was very isolated and lived in the home that he grew up in, by himself. His mother passed away and he took over the home, but he was not equipped to keep up with it.”

Heffernan explained to the homeowner that they had to clear out some of the clutter in order to perform the work that the house needed. She asked him to tag items save, donate or throw away.

“I gave him the tags, and the next day I went back, and he was so proud of himself… And then I looked, and everything was labeled save.”

It took Jeanie and her team a full day to sort through the homeowner’s belongings. The following week, early in the morning, she returned with a staff of 25 people ready to work. But when she knocked on his door, the homeowner wouldn’t let her in, claiming that the team had thrown out an item he intended to save. Eventually, Heffernan was able to convince the homeowner to let them in.

“He learned to love us, he loved having us there. He enjoyed having the camaraderie, he was working directly with us. When it was time for us to wrap up, he was beside himself because he was going to be alone. So we said we’ll check in on you, we’ll come back and visit.”

But that wasn’t all. The homeowner, a Phillies fan, didn’t have his own TV. A team member bought him one. Another donated Phillies tickets. He had never been to a game.

Working for the Common Good

Rebuilding Together Philadelphia recently named the Blue Crew its Volunteer Organization of the Year. Heffernan was proud to accept the award on its behalf. “People want more out of their lives than just going to their job,” she tells us, and Rebuilding Together is just one of the many opportunities for Independence associates to get more from their work experience. “We get to work arm in arm with associates throughout the organization for the common good.”