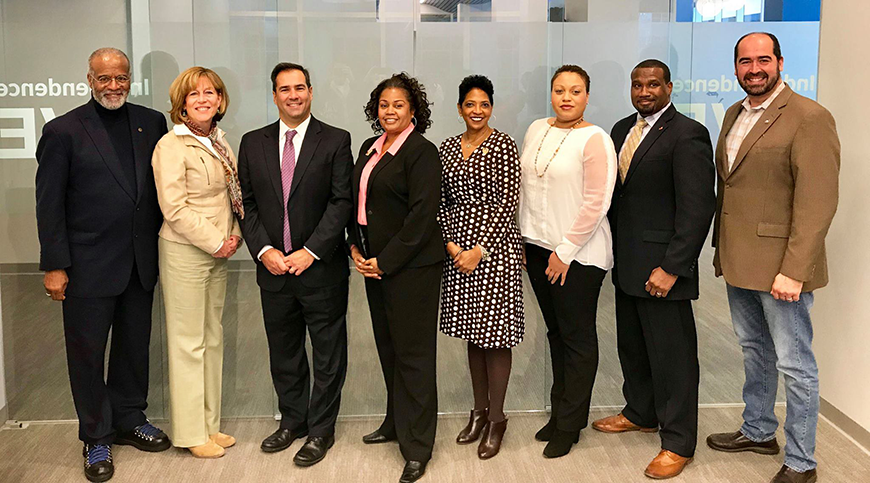 Lena Anderson (3rd from right) is pictured with colleagues at an IBX Veterans Day event at Independence LIVE.

If there’s one quote that captures my journey from military service to IBX, it’s this one, from Will Smith: “On the other side of your maximum fear, are all the best things in life.”

In 2013, I found myself one semester away from graduating with my bachelor’s degree — and entirely out of money. I had exhausted my undergraduate federal student loans, didn’t make nearly enough money to pay for my education on my own, and my employer didn’t offer tuition reimbursement. After extensive research and weighing my options, I concluded that joining the Army National Guard was the answer.

Six months after I made the decision, and the day after my 32nd birthday, I reported to Fort Sill, Oklahoma, for basic training. There I was, sweaty, exhausted, and with tears streaming down my face after a phone call with my mother. I was able to let her know only one thing — that I was okay. I wouldn’t make another phone call for a few weeks. I left all the creature comforts of home to embark on a five-month journey that proved to challenge me both mentally and physically.

I got into the best shape of my life. I’ll never scale a 40-foot wall again if I don’t have to, but I nearly conquered my fear of heights. Having never held a weapon in my life, I became proficient with firing an automatic weapon. I learned to drive different types of military trucks. Me, a truck driver! I went through every possible range of emotions — fear, insecurity, loneliness, excitement, and pride. I also learned not to take myself so seriously. Being around other soldiers who are barely out of high school will force you to learn to laugh at yourself.

What came after my training was a series of tenacious steps in my personal and professional development that I attribute to the skills I acquired during my military training. I felt like a fire had been lit inside of me, pushing me to work toward goals I had long suppressed. I decided to leave my past employer because there was no real opportunity for growth.

In the fall of 2014, I used my military status to apply for the Veterans Recruiting event held by Independence Blue Cross’s Talent Acquisition team and IVets, the veterans associate resource group. I was subsequently hired, starting on the path to my current career.

Nearly three years and several role transitions later, I’ve finally realized my goal of working in Human Resources. I also have the honor of being a member of the leadership committee for the Ivets, serving the veteran population within the company and the surrounding community. I’ve learned so much in my short time with the company, and feel fortunate that my military preparedness and courage to seek new roles has afforded these great opportunities.

In the summer of 2015, I completed my bachelor’s degree and I’m currently pursuing an MBA with a Human Resources concentration. I continue to serve as a Motor Transport Operator for the Pennsylvania Army National Guard. Working at IBX has allowed me to continue my educational pursuits. This path, along with other welcomed and unexpected changes in my life, are all a result of the choice I made to join the military. I found bravery in an unexpected place and that decision has forever changed the trajectory of my life.

I’m a human resources professional coming up on my three-year company anniversary. As an Army National Guard Specialist with the 131 Transportation Unit in Williamstown, PA, I’m thrilled to be part of the iVets associate resource group. When I’m not busy with classwork for my MBA at Holy Family University, I’m focused on international travel.