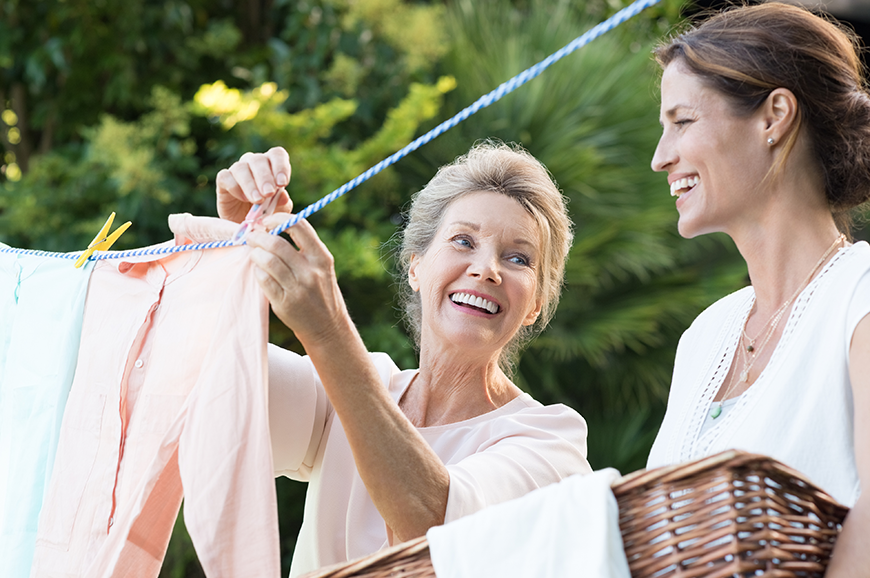 True confession: I have lived in my apartment for five years, and I have never once washed the windows. In my defense, you wouldn’t know it — washing windows has gone the way of the horse and buggy. Now that roads are paved and gas-powered vehicles are subject to emissions testing, windows just don’t get dirty like they used to. As far as my grandmother is concerned though, chores like window-washing are mandatory.

My grandmother is in her late 80s. A retired doctor, she lives in a two-bedroom ranch that she bought after my grandfather died. In old photographs, her heart-shaped face is accentuated by dramatic cat eye glasses, and her nipped-in waist is flattered by handmade ensembles that look snatched right out of fashion magazines. In her prime, she managed her own large home in Philadelphia, a vacation property at the Jersey shore, and a thriving medical practice dedicated to caring for seniors. She cared for her own parents in their old age, raised three children and a string of spoiled terriers, babysat her grandchildren, and — as the first woman on her medical association’s national board — she zipped down to Bethesda to participate in lobbying efforts.

Until recently, she also cooked, cleaned, and meticulously (some might say obsessively) sorted her garbage, but lately she hasn’t been up to it.

To her credit, she has handled the shift with grace and poise. She’s had a bi-monthly housecleaner for years who knows just how she likes her windows done, and several years ago she gave up driving and started ordering her groceries online. Her basement laundry room is full of obstacles, and my aunt has finally persuaded her to leave the laundry to someone else.

But every once in a while, during a lull in the conversation, her eyes get a faraway look. “Just think,” she says, “six months ago I was doing laundry.” I can’t imagine missing laundry, but for my grandmother, laundry is a symbol of the self-sufficiency that she’s had to give up.

When a loved one faces decreasing independence, it can be hard on everyone. My mother and her siblings have struggled with a range of emotions as they adapt to greater caregiving responsibilities for my grandmother, from getting used to calling the shots to figuring out how to accept help from others as they juggle their duties. Older adults who are giving up some of their independence can also feel isolated or frightened, which can lead to depression. For those who are used to exerting a great deal of control over their surroundings, it can be anxiety-provoking to hand over control.

There can be sweetness in the shift, though, too. As adults, we often draw away from our parents and families as we forge our careers or build our own family units. Senior caregiving can offer an opportunity to get to know one another anew, and for our loved ones, giving up some independence can mean getting to spend more time with those they hold dear. It can even result in new friendships with caregivers like nursing staff or physical and occupational therapists whose warmth and support can encourage cross-cultural and cross-generational connections. Our new paths make room for new traditions — like my favorite, watching Jeopardy with my grandmother after dinner, marveling as she snaps out the right answer faster than the contestants at least half the time.

And, of course, it’s given me the chance to learn how she likes her garbage sorted. Here’s hoping some of her good habits stick! My family and I will be moving into our first house next month, and I’d like the windows to sparkle.

I work in Medicare Marketing at Independence and blog about navigating life with chronic illness and other issues relevant to caregivers and health care consumers of all ages.